Bathroom taps today are not just an accessory at the end of a pipe only, some of them offer combined functionality while still others look like works of art. There are hundreds of options that are available to you, starting from the common basic ones to the mixer variety where you can control the temperature and the flow. You will get taps where at the slightest turn the water comes out like a jet or as foam. So how do you know which taps are ideal for your bathroom if you are renovating or building one from scratch?

Here is a step-by-step guide to buying bathroom taps if you are building or renovating your bathroom.

The size of the bathroom

Surprised by this point? Well, it is true; the size of the tap you buy should depend on the size of the bathroom.  It goes something like this. In a small bathroom, you will surely not have king-sized tubs and sinks. They should fit into the small area at your disposal. In such cases, large taps that jut out over the sink or faucets that do not fit in the side of the tub will be redundant. The same goes for showers and the controlling taps. What you have to ensure is that the size of the taps should blend in seamlessly in the overall decor and should not stick out like a sore thumb.

The functionality of the taps

Once you have decided the size of the taps, the next focus should be on functionality. Some of the options are basin taps, shower taps, handheld taps, mixer taps, high rise taps, wall assemblies and much more. Each has a specific function and you should choose one according to your need. In bathroom vanities, the size of the cabinet should be considered as a high rise tap fitted to the sink will touch the bottom of the cabinet. If it suits you, go for tall taps to be installed over insets and taps with a long sprout for freestanding baths. 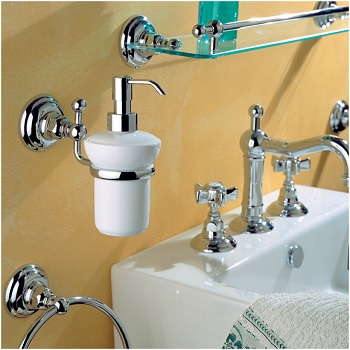 Water pressure in your bathroom is a crucial factor for deciding the right tap for your home. When you buy taps from say, Middletons Bathroom Supply Store in Melbourne, you should enquire about the water pressure capacity of the taps before choosing a few of them. This is because taps are manufactured to handle different water pressures. Taps that are installed at a higher level near overhead tanks have to lower water pressure passing through them as against those installed at lower levels where the pressure will be more. It is recommended that you discuss this aspect with the person at the counter before purchasing taps.

After these three stages, you should turn to the aesthetics of the taps. You have many choices before you when it comes to choosing taps. Your emphasis should be to buy taps that match the decor and theme of your bathroom as well as taps that complement other fittings in your bathroom for an overall harmonious look. For instance, you can match a cube shower mixer with cube basin mixer or a square shower head with a square shower mixer.

While buying taps might seem like a simple and straightforward exercise, you should give it as much importance as you would for other aspects of bathroom building or renovation.